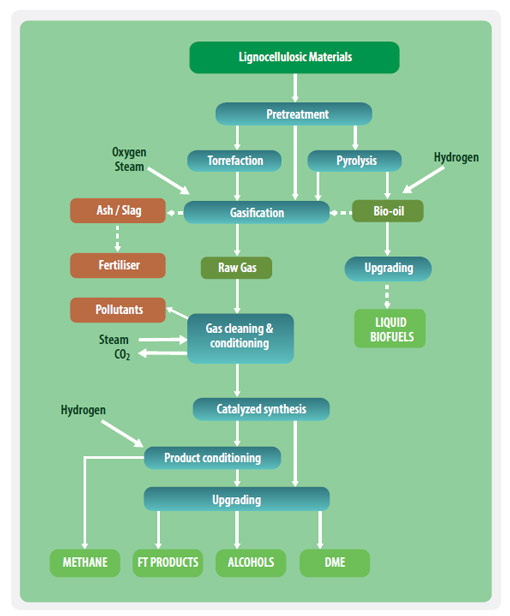 Within this production scheme the biomass is first thermally fragmented to synthesis gas consisting of rather simple molecules such as: hydrogen, carbon monoxide, carbon dioxide, water, methane, etc. These gaseous material are then chemically re-synthesized to biofuels. Various catalytic process can be performed:

After the size reduction, the material is moved into the gasifier where it transforms into gas (mainly composed of hydrogen and carbon monoxide) and solid by-products (char or ashes and impurities). Gasification takes place under shortage of oxygen (typically = 0.2-0.5). The product gas has a positive heating value, and, if char is produced, this also has a positive heating value. By reducing the amount of available oxygen, other processes are triggered, called pyrolysis and liquefaction.

The gasifier types can be classified according to the way the fuel is brought into contact with the gasification agent. There are three main types of gasifiers:

The amount and kind of impurities depend on the type of biomass used as fuel. Impurities can cause corrosion, erosion, deposits and poisoning of catalysts. It is therefore necessary to clean the product gas. Dust, ashes, bed material and alkali compounds are removed through cyclones and filter units, the tar through cooling and washing the gas using special solvents or by condensation in a wet electro filter. Components having mainly poisonous effects are sulphur compounds that can be withdrawn by an amine gas treating, a benfield process or similar process, and nitrogen and chloride for which wet washing is required. The cleaned product gas will then be upgraded.

Starting form the synthesis gas (=the cleaned and upgraded product gas) several fuel processing pathways are possible. One of these is the Fischer-Tropsch (FT) process, through which alkanes are produced in fixed bed or slurry reactors using mostly iron and cobalt as catalysts.

The raw product, though, cannot be directly used as fuel, it needs to be upgraded via distillation to split it into fractions; via hydration and isomerization of the C5 – C6 fraction and reforming of the C7 – C10 fraction in order to increase the octane number for petrol use; and via cracking by application of hydrogen under high pressure in order to convert long-chain fractions into petrol and diesel fraction.

The withdrawal of CO2 can be performed by water scrubbing (a counter-current physical absorption into a packed column) and Pressure Swing Adsorption (an absorption into a column of zeolites or activated carbon molecular sieves followed by a hydrogen sulphide removing step) technologies. Natural gas quality is reached at 98% methane content. The final step is the gas compression (up to 20 bar for injection into the natural gas grid, up to 200 bar for storage or for use as vehicle fuel).

Starting from a suitably upgraded product gas, it is possible to synthesize alcohols as main products via catalytic conversion. The higher alcohol synthesis (HAS) follows the reaction:

As HAS is a highly exothermic process, the optimization of heat removal is of particular interest. The product upgrading of the obtained alcohol mixture consists typically of de-gassing, drying and separation into three streams: methanol, ethanol and higher alcohols.

This is a two stage catalytic process. In the first stage LINK methanol is produced. The methanol is then used as feedstock to generate hydrocarbons of varying chain length, using a zeolite catalyst. In the conversion, a number of reactions take place in the gas phase. The conversion is initiated by the removal of water to produce dimethyl ether:

This is followed by various other reactions in which further molecules of water are removed resulting in gradual increase in chain length.

These reactions include the following.

As a result of other dehydration reactions occuring in parallel a mixture of hydrocarons is produced of which about 80% is suitable for petrol production. The mixture contains (w/w) around 50% highly branched alkanes, 12% highly branched alkenes, 7% cycloalkanes and 30% aromatics. This process has been commercialised by Methanex in New Zealand using methanol produced from natural gas.

Dimethyl ether (typically abbreviated as DME), also known as methoxymethane, wood ether, dimethyl oxide or methyl ether, is the simplest ether. It is a colourless, slightly narcotic, non-toxic, highly flammable gas at ambient conditions, but can be handled as a liquid when lightly pressurized. The properties of DME are similar to those of Liquefied Petroleum Gas (LPG).

Alternatively, DME can be produced through direct synthesis using a dual-catalyst system which permits both methanol synthesis and dehydration in the same process unit, with no intermediate methanol separation, a procedure that, by eliminating the intermediate methanol synthesis stage, the licensors claim promises efficiency advantages and cost benefits. Both the one-step and two-step processes are commercially available. DME can also be converted itself into olefins and synthetic hydrocarbons.

Pyrolysis uses rapid heating or super-heated water to convert organic matter to oil. Flash pyrolysis involves rapid heating (1-2 seconds) of fine material up to 500°C. Thermochemical conversion uses superheated water to convert organic matter to bio-oil. This may be followed by anhydrous cracking/distillation. The combined process is known as Thermal depolymerization (TDP). Bio-oil can be used as a heating fuel or can be further converted to advanced biofuels.

In the HTU® (hydrothermal upgrading) process, originally developed by Shell, biomass is treated with water at high temperature and pressure (300-350°C & 120-180 bar) to produce bio-crude. This can be separated by flashing or extraction to heavy crude (suitable for co-combustion in coal power stations) and light crude, which can be upgraded by hydrodeoxygenation (HDO) to advanced biofuels (Source: Biofuel BV presentation).

Tall oil, a residual product of the pulp and paper industry, is also being used to produce biodiesel. The first commercial-scale facilities are being developed in Europe.

See the Bio-oil page for further information on commercial development of pyrolysis technologies.