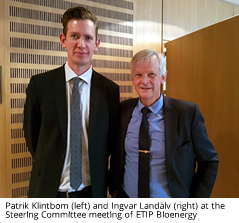 We are delighted to announce the appointment of Patrik Klintbom as the new Vice Chair of the European Technology and Innovation Platform Bioenergy (ETIP Bioenergy). The ETIP Bioenergy Steering Committee approved his nomination in Brussels on the 10th of October 2017 meeting.

Patrik has been a Senior Researcher on sustainable transport at the Research Institute of Sweden (RISE), Göteborg. since 2017. Previous experience also includes 17 years at Volvo Group, where he held a number of positions: Director of Environment and Energy, Director Core Values and Public Affairs, Coordinator and Senior Specialist Alternative Fuels and Energy Resources, and LCA Specialist. With such a wide background of expertise, we are convinced that Patrik is a perfect candidate to lead the activities of the platform.

“During my career I have had the privilege to deeply analyse the environmental and energy challenges that we are facing. Bioenergy is key for reducing dependency on fossil fuels and decarbonise transport. It is a great honour for me to be appointed Vice Chair of ETIP Bioenergy. I am looking forward to the interesting and challenging task!”, Patrick said at the Steering Committee meeting.

ETIP Bioenergy is thankful for  the success brought by Ingvar Landälv and Markku Karlsson in their roles as   ETIP Bioenergy as Chair and Vice Chair.  Without their consistently exceptional performance, ETIP Bioenergy would not be what it is today: a platform connecting biofuels and bioenergy stakeholders across Europe in  constructive dialogue on technological development  within the sector. Ingvar and Markku are planning to step back from their ETIP Bioenergy activities in March 2018. Until then, they will work closely together with Patrik in order to support him in his first months with ETIP Bioenergy.

“I wish Patrik great success when he takes over the chair in a couple of months” -Ingvar Landälv, chair of ETIP Bioenergy. “After a period of wait and see we are  witnessing promising developments in the area of biofuels and bioenergy in the form of increased interest from industry. The more active involvement by industry in the platform, which we have seen since some months back, is important and I trust ETIP Bioenergy’s input will gain more impact. Industry’s view on e.g.the SET Plan update and RES II is vital input to the Commission and to the member states”, he added.

Below is a short interview with Patrik.

What is your view on the prospects for sustainable transport in the next decade, specifically the role of biofuels within the sector ?

Sustainable transport is a vital element in a sustainable society. Sustainable transports cannot be achieved without the supply of sustainable energy. Thus, biofuels are a key element that is necessary in order to achieve sustainable transport. Biofuels cannot replace the total amount of fossil fuels that is consumed today. However, I believe that biofuels can play a very important role alongside other measures. In order to have substantial amounts of biofuels in the future we have to provide a level playing field and develop technologies and policies that unlocks the potential.

How can technology and innovation contribute the development of sustainable transport by 2030?
To provide substantial amounts of sustainable biofuels in the next decade, a much broader range of biomass feedstocks will have to be exploited at industrial scale. Conversion technologies need to cope with these and have to improve their efficiency. Final products have to meet increasingly strict technical specifications for different end uses. All this has to happen in an increasingly integrated transport system. Research and innovation will play a key role to achieve this, both for mastering the different steps to upscale promising technologies and advancing technologies which are still at a lower Technology Readiness Level (TRL) at the moment. The New SET-Plan initiative of the EU comes timely to give impetus for these developments.

Patrik started working for the Volvo Group in early 2001. In his first role, he analysed the environmental impact of products and services by applying LCA methodology at Volvo Technology. One important study was an LCA of a complete truck. In 2003 Patrik started working with LCA for alternative fuels (so called Well to Wheel analysis). This work was part of a major update of the Volvo Group Strategy for Future Fuels. In late 2003 he changed roles to become Coordinator for Alternative Fuels and Urea. From late 2003 until early 2011 he worked with a wide range of issues related to fuels and energy supply in general. The tasks included: deep analysis of the “peak oil” issue, standardisation, projects such as the “CO2-Neutral” which demonstrated  eight different trucks running on eight different fuels .

Patrik was also involved in several EU-funded projects such as RENEW and AFFORHD. He took part in the preparations of the European Biofuels Technology Platform and later he also became a member of the sustainability workgroup.
In March 2011 Patrik was appointed Director of Environment and Public Affairs at Volvo Powertrain. In this role, he was responsible to set, update and follow up the environmental strategy for Volvo Powertrain. In March 2012 Patrik was appointed Director, Core Values and Public Affairs within Sales and Marketing for Europe, Middle East and Africa. In October 2013 he joined the Volvo Group Headquarters as Director Environment and Energy In this role, he was the Chairman of the Volvo Group Internal governance structure for energy and alternative fuels. January 2017, Patrik joined Volvo Group Trucks Technology, in his ultimate role prior to leaving Volvo he was responsible for emission requirements for the heavy-duty engine platform.

Patrik was the Chairman for the Swedish Energy Agency Development Platform for Transport during 2011-2016. He also took part in the Swedish study on Fossil Free Transports as expert. In addition, he was a member of the Sub Group on Advanced Biofuels and he is currently leading the Heavy-Duty expert group within the ART-Fuels forum.
In July 2017 Patrik left Volvo and Joined RISE Viktoria (Research Institutes of Sweden) as Senior Researcher Sustainable Mobility. RISE is a state owned Independent Research and Innovation Institute with a wide-ranging set of competencies including sustainable mobility. Specifically, the complete chain from energy supply to transport systems and all modes of transport other competencies span across other related subjects such as city planning.

Patrik presently lives with his family on the island of Tjörn on the west coast of Sweden. He spends his spare time with his family and dogs and enjoy taking long bicycle rides.