Butanol is an alcohol that can be used as a transport fuel. It is a higher member of the series of straight chain alcohols with each molecule of butanol (C4H10O) containing four carbon atoms rather than two as in ethanol.

Butanol was tradionally produced by ABE fermentation - the anaerobic conversion of carbohydrates by strains of Clostridium into acetone, butanol and ethanol. However, cost issues, the relatively low-yield and sluggish fermentations, as well as problems caused by end product inhibition and phage infections, meant that ABE butanol could not compete on a commercial scale with butanol produced synthetically and almost all ABE production ceased as the petrochemical industry evolved.

However, there is now increasing interest in use of biobutanol as a transport fuel. 85% Butanol/gasoline blends can be used in unmodified petrol engines. It can be transported in existing gasoline pipelines and produces more power per litre than ethanol. Biobutanol can be produced from cereal crops, sugar cane and sugar beet, etc, but can also be produced from cellulosic raw materials.

In October 2013, ASTM D7862 was announced for blends of butanol with gasoline at 1 - 12.5 % vol in automotive spark ignition engines. The specification covers three butanol isomers: 1-butanol, 2-butanol, and 2-methyl-1-propanol. The specification specifically excludes 2-methyl-2-propanol (that is, tert-butyl alcohol).

In December 2014, ASTM D7875, was approved: 'Standard Test Method for Determination of Butanol and Acetone Content of Butanol for Blending with Gasoline by Gas Chromatography'. The standard is primarily designed to ensure the purity of isobutanol manufactured for use as a fuel.

A number of novel pathways are being developed for producing advanced biofuels, via catalytic chemistry. The aim is to produce petrochemical replacements - synthetic fuels that can be used in conventional engines ('Drop-in' biofuels). 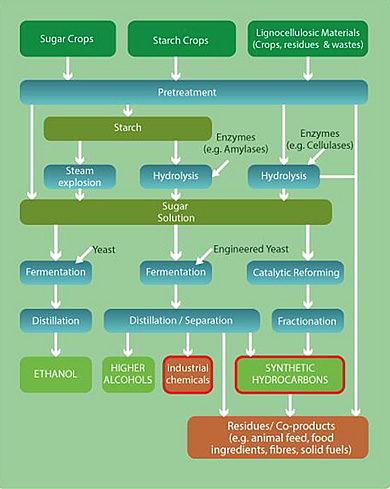