State of the Art for liquid, synthetic hydrocarbons

Major stakeholders in liquid, synthetic hydrocarbons in the EU

Hydrocarbon fuels produced from biomass are called biofuels. When the fuels are produced via extensive processing, such as the XtL routes, they are generically called synthetic fuels. 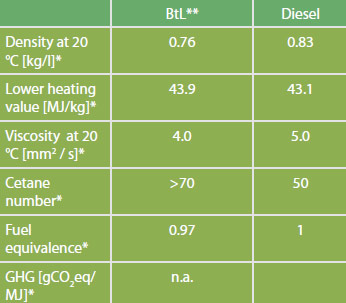 Source: FNR 2012. * Median values are used for simplification. Please refer to the standards for ranges. ** Figures based on FT.

A wide variety of hydrocarbon components are blended together to make fuels according to the specifications appropriate for cars, trucks, trains or aeroplanes.
Liquid, synthetic hydrocarbons (XtL) can be used in petrol, diesel, aviation fuel and marine fuels. To what extent depends on their properties, which result from the specific manufacturing process and subsequent downstream processing. XtL is the generic abbreviation for synthetic liquid hydrocarbons. To distinguish between the different raw materials; the abbreviations CtL (Coal to Liquid), GtL (Gas to Liquid) and BtL (Biomass to Liquid) are used. BtL is produced in a four-step-process:

Exact reactions are multifold, e.g. any sulphur becomes H2S and COS

and removal of CO2, and any H2S and COS

3. Synthesis via a type Fischer-Tropsch process:

synthesis via a Methanol-to-Gasoline process:

This can range from simple distillation to complex hydroprocessing and distillation. This is followed by preparation of final fuels, which is largely a skilled blending operation.

Hydrotreated vegetable oils (HVO) are produced from vegetable oils or fats via direct hydrogenation (hydrogenolysis). It is possible to use the catalytic processes and catalysts similar to crude oil middle distillate hydro treatment, which is a commercial process. The liquid fuel is comparable to FT fuels.

Currently, there is no large-scale production of BtL fuels in Europe. The research project OPTFUEL, led by the Volkswagen Group, aims at demonstrating the production of BtL-based fuels made from wood and wood residues. In the OPTFUEL project fast growing biomass like willow or poplar are used as feedstock. The development of BTL production technology is still in progress and is not yet competitive. CHOREN Industries Ltd. developed the so-called Carbo-V process, which is a three-stage gasification process resulting in the production of syngas:

After gas conditioning the Fischer-Tropsch process is then used to convert the synthesis gas into a crude product which is further processed using hydrocracking into products such as the automotive fuel SunDiesel™.

Currently, a pilot plant for a novel production process, the so-called bioliq-process, is underway at the Karlsruhe Institute of Technology (KIT). The bioliq pilot plant will cover the process chain required for producing customized fuels from residual biomass, dry straw or wood. Furthermore, the integrated process chain enables production of both fuels and chemicals. The concept combines decentralized production of an energy rich intermediate product “bioliqSynCrude” and centralized processing into products with final industrial-scale refinement.

Hydrocarbon fuels are ideal for transportation applications because they have high energy content per volume or mass and, since they are mostly liquids, they can be easily transported and stored. Their utilization as a transportation fuel requires no significant changes to the existing infrastructure and engines, because synthetic hydrocarbons can be processed to fit the current specifications. Hence they are often referred to as drop-in fuels.

CEA Bure Saudron - will use foresty and agricultural residues to produce ~23000 tonnes/year of biofuel (diesel, kerosene and naptha)

Some major bioethanol stakeholders in the EU are listed below: