Development of sustainable advanced biofuels is part of the Strategy for a Sustainable European Bioeconomy proposed by the European Commission in February 2012 to shift the European economy towards greater and more sustainable use of renewable resources and processes (for food, feed, energy and industry).

In 2009 the EU bioeconomy had a turnover of nearly €2 trillion (2012) and employed more than 22 million people, 9% of total employment in the EU. The statistic included agriculture, forestry, fisheries, food and pulp and paper production, as well as parts of chemical,biotechnological and energy industries. Each euro invested in EU-funded bioeconomy research and innovation was estimated to trigger €10 of value added in bioeconomy sectors by 2025.

EEA published a report "Renewable Energy in Europe - 2017 Update - recent growth and knock on effects", which provides a detailed annual assessment of RES since 2005.

The following table is reproduced from the report and shows the actual final renewable energy consumption in transport for 2005, 2014 and 2015, approximated estimates for 2016 and the expected realisations in the energy efficiency scenario of the NREAPs for 2020.Also shown are the actual compound annual growth rates for 2005 - 2015, the growth from 2014 to 2015 and the compound annual growth rates required to reach the expected realisation in the NREAPs. The consumption of RES accounts for only biofuels complying with RED sustainability criteria. Sources EEA, Eurostat 2017b; NREAP reports .

In November 2017, the International Energy Agency published a “Technology Roadmap: Delivering Sustainable Bioenergy”, which provides the technology milestones and policy actions needed to unlock the potential of bioenergy in line with a long-term low-carbon and sustainable global energy mix. According to the roadmap, biofuel consumption in the transport sector must triple by 2030, with two-thirds of that coming from advanced biofuels. That means scaling up current advanced biofuels production by at least 50 times to keep pace with the 2DS requirements by 2030. In scenarios with more ambitious carbon reduction objectives, such as the IEA’s Beyond 2 Degree Scenario (B2DS), bioenergy linked to carbon capture and storage also becomes necessary. 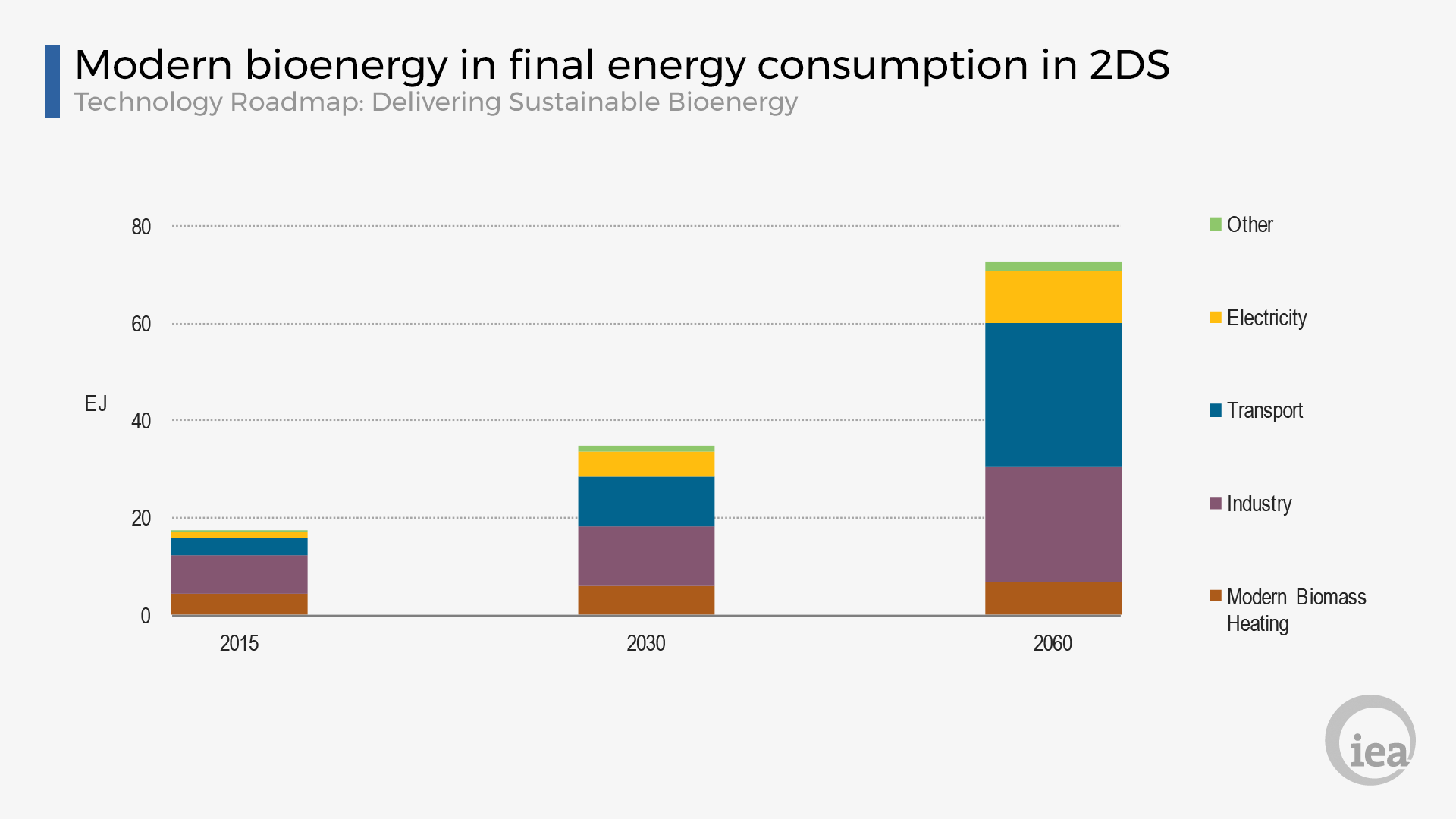 Bioenergy in final energy consumption needs to double by 2030, and biofuels in transport treble. Advanced biofuels will need a massive scale up; Source: IEA

The IEA’s technology roadmap shows how that gap can be bridged, and highlights various areas where urgent action is needed, such as accelerating the deployment of a range of mature bioenergy solutions, which can immediately deliver multiple benefits, and enabling the deployment of the new technologies which are needed in a future low carbon energy system. In January 2017, IEA also published a How2Guide for Bioenergy, jointly developed with the Food and Agriculture Organization of the United Nations (FAO), as a toolbox that can be used for both planning and implementing new bioenergy strategies, or to improve existing ones.[Source: IEA Press releasefile].

The ICCT published a white paper in September 2017 on lessons learned for successful market introduction of advanced alternative fuels. The paper “Effective Policy Design for Promoting Investment in Advanced Alternative Fuels” finds that policy requirements are:

The full report identifies and analyzes lessons learned from the past decade of policy experience. These can help inform the design of many policy types that may be implemented in the future.

Information on market development initiatives are provided on the individual pages covering road transport, shipping and aviation. See the ETIP deployment support measures database which collates information on initiatives and supports to accelerate use of advanced biofuels at national and international level.

Statistics and market information are available from:

There has been a specific focus on development of alternative aviation fuels within the European Union - partly because liquid biojet fuels are currently the only alternative to fossil fuels for air transport (i.e. electrification is not an option). In 2011 the EC, in coordination with Airbus, leading European airlines (Lufthansa, Air France/KLM, & British Airways) and key European biofuel producers (Neste Oil, Biomass Technology Group and UOP), launched an initiative to speed up the commercialisation of aviation biofuels in Europe. The initiative, labelled "European Advanced Biofuels Flight path" is a roadmap with clear milestones to achieve an annual production of two million tonnes of sustainably produced biofuel for aviation by 2020. Further information is provided on the aviation biofuels page of this website.

Policy-driven development of biofuels markets in the EU

In recent years, market development of biofuels in Europe has been driven by binding targets set in the Renewable Energy Directive for 10% of renewables in transport energy use by 2020. Public concerns over land use issues have led to the amendment of the Renewable Energy Directive in 2015 (EU/2015/1513) which caps the use of conventional biofuels derived from crop plants at 7%. At the same time it obliges Member States to implement a target for biofuels from non-food feedstock of at least 0,5% in transport energy in 2020. As a further incentive the amendment rules the double-counting of the energy contents of advanced biofuels towards the renewable energy target of 10%. Hence the future expansion of biofuels markets in Europe is dependent on the commercial deployment of advanced biofuels that use wastes, residues and energy crops (grown on marginal land) as feedstocks. In addition, electricity from renewable resources for rail transport is counted 2,5 times and for road transport 5 times the energy content.

However, no targets for biofuels are included in a policy framework for climate and energy in the period from 2020 to 2030. This represents some 'contradiction' in policies as the European Energy Security Strategy COM(2014) 330 final, published in May 2014, highlights the need to reduce reliance on fuel imports to the EU. The important role played by biofuels is included in COM(2013) 17 Clean Power for Transport: A European Alternative Fuels Strategy.

ePure position during the negociation of the RED amendment

In 2013, in preparation of the amendment of the Renewable Energy Directive, ePure, the association of the European ethanol producing industry, published a study on the double counting proposal: Double Counting, Half Measures: Study on the effectiveness of double counting as a support for advanced biofuels. The study concludes with alternative measures to accelerate deployment of advanced biofuels:

The JEC research collaboration started in 2000 bringing together:

The JEC research collaboration provides scientific facts to European institutions, Member States and sector stakeholders relating to the energy use and efficiency and emissions from a broad range of road vehicle powertrain and fuel options.

The JEC Biofuels Programmes (2008-2010; 2011-2014) assessed the possible biofuel implementation scenarios for achieving EU renewable energy targets in the transport sector by 2020. These scenarios were assessed by modelling and other analyses.

In 2014 the JEC consortium came up with a revised version of its first report of 2011. The reference scenario and three fuel demand scenarios have been re-developed and tested on the legislative concepts proposed by EU institutions to modify the RED and FQD regulation with a view to including ILUC concerns. The revised reference scenario has been compared to the outcomes of the JEC Biofuels Study in 2011 to identify and characterise the main drivers behind different results on the capacity to attain the RED and FQD targets. The main conclusions to be drawn from the analysis performed in this revised version of the JEC Biofuels study using the F&F model and a revised bottom-up supply outlook for advanced biofuels are: