The Bio-CCS JTF is a Joint Task Force on Bioenergy and Biofuels production with Carbon Capture and Storage, involving members of ZEP (Zero Emissions Platform) and the EBTP. The Secretariat of the Bio-CCS JTF is provided by Bellona (which is active in both platforms). The Joint Task Force looks at the potential benefits of combining CCS with biomass energy production, and covers topics such as co-firing of lignocellulosic feedstocks (wood, straw, etc) in power stations, co-gasification, CO2 waste streams from biofuel production plants or biorefineries, and the potential for carbon negative solutions (i.e. removal of carbon dioxide from the atmosphere and geological storage via biomass conversion).

Both CCS and advanced biofuel/bioenergy technologies are still at the pilot/demonstration phase. However it is recognised that both technologies will become increasingly important in reaching 2050 targets for GHG reduction. Looking at synergies between potential geological storage sites for carbon dioxide, innovative capture technologies, and the location and design of advanced biomass energy or co-firing/co-gasficiation facilities is of interest to researchers in both fields. 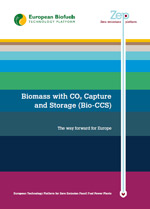 This report was produced by the Zero Emissions Platform with input from the European Biofuels Technology Platform.

The report was launched in Brussels in June 2012 during the first Bio-CCS session to be held during European Sustainable Energy Week.

The Bio-CCS JTF was involved in the the Second International Workshop on Biomass & Carbon Capture and Storage, which was hosted by the Cardiff Univesity School of Engineering on 25th and 26th October 2011.

The workshop was organised by Bellona in association with Cardiff University (both respresented on the EBTP Steering Commitee). Bellona is also a member of ZEP. The event was kindly sponsored by Alstom and IEAGHG, and builds upon the 1st International Workhop on Bio-CCS held in Orléans France on 14th and 15th October 2010.

The following topics were covered by the Second Workshop: