Biogas/Biomethane for use as a transport fuel

EC Projects related to use of biomethane in transport in Europe

Current use of natural gas as a transport fuel in Europe

Biogas is a mixture of biomethane CH4 (65-70%) and CO2 (30-35%) and small amounts of other gases. It is created by anaerobic digestion of organic wastes such as sewage, manure, food wastes, landfill, etc. This is an established technology. After removal of contaminants, biomethane is the same as natural gas, and can be used as a transport fuel in the form of Liquid Natural Gas (LNG) or Compressed Natural Gas (CNG).

Bio-SNG (Bio Synthetic Natural Gas) is produced by gasification of lignocellulosic (woody materials). A number of Bio-SNG demonstration projects are discussed on the Bio-SNG page of this website.

Anaerobic Digestion technology is well established, hence biogas is often categorised as a 'first generation' biofuel. However, biogas derived from organic wastes does not compete with food production, and is considered to be sustainable.

The latest news and statistics on biogas production and use in Europe are available from the European Biogas Association website. 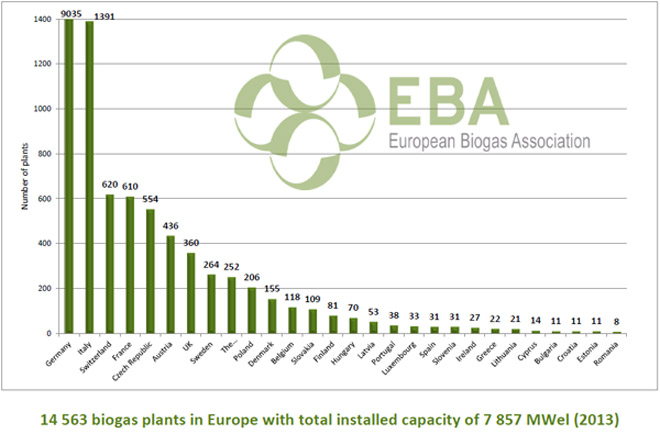 In 2013, the fastest growth was seen in Central Europe: Hungary, the Czech Republic, Slovakia and Poland where an increase of 18% in the number of biogas plants in the region was recorded. Biogas plants in UK, France and Sweden, continue to develop at a steady. However, there are concerns over foreseen changes in support schemes across Europe. The Czech Republic and Cyprus have already ceased support for biogas plants, while German and Austrian biogas plant operators are facing local caps [Source: EBA 2014].

Production of biomethane (cleaned biogas, which is equivalent to natural gas) is also increasing in Europe. In 2013 there were 282 plants with a total annual production of 1.303 billion m3. The number of biomethane filling stations doubled in 2013 with 10% of the total produced biomethane in Europe now used in transport [Source: EBA 2014]. 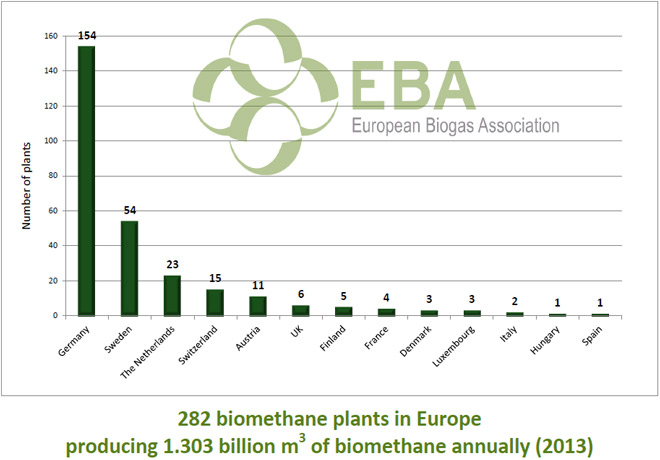 Use of biomethane in transport

Developing use of biomethane for transport is the focus of several projects such as BIOMASTER, MADEGASCAR, GasHighWay, BioGas Max, Urban Biogas, Green Gas Grids and Baltic Biogas Bus, which aim to increase its use in the market.

Biogas is used globally in waste to energy plants, and is increasingly being converted to natural gas for injection into pipelines or use in vehicles. For example, in the US, Waste Management Inc. operates 2 plants in California and Ohio (with a third announced in October 2013) to convert landfill gas to liquified natural gas. Waste Management also produces over 500 MW of electricty from biogas, and its subsidiary Wheelabrator Inc. has a capacity of almost 670 MW. Waste Managment also uses bioCNG to power a fleet of 100 trucks.

Demonstrations on biogas production in Europe

VERBIO Straw to biogas project, Germany, to be supported under the NER300 first call

On 18 December 2012 it was announced that VERBIO Straw project, Germany, has been selected to receive counterpart funding of €22.3m under the first call for proposals of the NER300 funding programme for innovative low-carbon technologies. The Project will be built as an extension to an existing ethanol-biogas plant in Schwedt, Germany, to produce biogas. The Project will have a design capacity of 25.6 Mm3(S) of biogas containing 12.8 Mm3(S) of methane and make use of 70000 t/year of straw. The process comprises raw material handling, biomass pre-treatment of biomass by steam and enzyme successively, production of biogas by anaerobic fermentation, and biogas post-treatment. The produced gas will be cleaned to natural gas quality and fed into the grid. The Project is planned to be located in a refinery site of PCK Raffinerie GmbH (Refinery Site) and it benefits from the existing site infrastructure.

EC Projects related to use of biomethane in transport in Europe

BIOSURF is an EU-funded project under the Horizon 2020 programme. The BIOSURF consortium consists of 11 partners from 7 countries and strives to increase the production and use of biomethane (from animal waste, other waste materials and sustainable biomass), for grid injection and as transport fuel, by removing non-technical barriers and by paving the way towards a European biomethane market. BIOSURF intends:

The FP7 project BioWALK4Biofuels aims to develop an innovative system for the treatment of biowaste and use of GHG emissions to produce biofuels, through the use of macroalgae.

The Eureka BIOGASFUEL project is developing a dual-fuel supply system for diesel engines using alternative fuel. The research programme on fuel will assess the possibility of using biogas as a fuel for compression ignition engines of non-road vehicles and machines used in agriculture.

The objective of the IEE project FaBbiogas is to elaborate a solid information base on FaB (Food and Beverage) waste utilisation for biogas production and to prove the efficiency and feasibility of FaB waste-based biogas implementation projects. The EU project FABbiogas (Intelligent Energy Europe) project aspires to change the mindsets of all stakeholders in the waste-to-energy chain by promoting residues from FAB industry as a new and renewable energy source for biogas production. Project outputs will support the diversification of energy sources within FAB companies, leading to wide-spread valorization and efficient integration of FAB residues into energy systems and boosting the realization of a growing number of biogas projects in Austria, Czech Republic, France, Germany, Italy and Poland.

Pretreatment of agricultural residues for enhanced production of biogas

Researchers at the Fraunhofer Institute IKTS, Germany, have developed the first-ever biogas plant to run purely on agricultural wastes. This demonstrates that pretreatment with enzymes can greatly increase biogas yields from cellulosic residues such as corn stalks.

In China, 3 pilot facilities have been built to demonstrate the production of biogas from rice straw pretreated with Sodium Hydroxide. With 23 day anaerobic digestion at mesophilic temperature of 35°C, rice straw pretreated with 10% NaOH at 20°C for 24 hours had the biogas yield of 0.6 L /g VS, 50% higher than the biogas yield from untreated straw. After enzymatic hydrolysis using cellulase from Trichoderma reesei ATCC 26921 and cellobiase from Aspergillus niger, the pretreated straw had the reducing sugar yield of 298 mg glucose/g VS, 185% higher than the untreated straw (Source: Dong Yang et al, published April 2009 American Society of Agricultural and Biological Engineers)

In the US, MagneGas has developed a technology to produce a mix of hydrogen and carbon monoxide from sewage and other liquid organic wastes using a patented technology called Plasma Arc Flow™, based on flowing the target liquid waste through a submerged electric arc between two electrodes. The arc decomposes the liquid molecules into atoms and forms a plasma around the tips of the electrodes at about 10,000°F / 5,500 C. The Plasma Arc Flow moves the plasma away from the electrodes and controls the formation of MagneGas that rises to the surface for collection. MagneGas is composed of hydrogen (55-65%), carbon monoxide (30-35%), carbon dioxide (1-2%), water vapor (2%), and trace gases (0.5-1%). The gas mixture can be used in a similar way to natural gas or can be co-combusted with existing hydrocarbon fuels.

Biogas can be produced via anaeobic digestion of farm or food processing wastes, and converted to heat and power on site. For example, in Europe companies such as ENER-G offer small-scale CHP (4kWe to over 10MWe) from biogas, with around 170MWe currently installed (May 2015).

The following links provide further information on EC R&D&D on Biogas production and its use as a transport fuel:

Biomethane for transport from landfill and anaerobic digestion

Use of natural gas as a transport fuel in Europe

Gas is widely used as a transport fuel in many European countries, notably Italy, which boasts 650,000 gas powered vehicles. Sweden is a world leader in upgrading and use of biomethane for transport, and has many 'biogas vehicles', including private cars, buses, and even a biogas train and a biogas powered touring car team.

The Netherlands is also expanding it's use of natural gas vehicles, and in September 2010 opened its 50th CNG filling station.

In February 2014 Cambi AS inaugurated a facility near Oslo to convert 50,000 tonnes of food waste to biogas, and produce LNG as a transport fuel for a local bus fleet. The biogas liquefaction plant was delivered by Wärtsilä Corporation and will produce fuel for 135 buses. The plant is operated on behalf of EGE (Waste-to-Energy Agency) and the City of Oslo.

New techiques are being developed to increase the methane content in 'product gas', so that it is suitable for direct injection into the grid. For example ETW Energietechnik in Germany, which uses Pressure Swing Absorption (PSA) technology developed by Schmak Carbotech.

In December 2013, the UK National Grid and Future Biogas announced an £8m anaerobic digestion project at Lindholme. The system will convert 35,000 metric tons of biomass into 12,000 cubic metres of biomethane for injection into the natural gas network. In February 2014, Iona Captial and Scotia Gas Networks announced an investment in a joint venture Keithick Biogas, the first biogas-to-grid project in Scotland, UK. 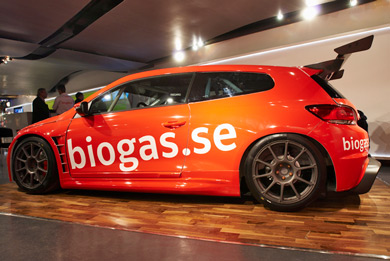 Liquefied biogas as a transport fuel in Sweden

In Summer 2012, a new liquefied biogas plant in Lidköping, Sweden, started operation. The plant produces transport fuel for cars, trucks and buses, in both gaseous and liquefied form, and is run by Lidköping Biogas AB. Orignally owned by Göteborg Energi AB and the Municipality of Lidköping, with Swedish Biogas International Lidköping AB owning and operating the biogas production plant. It has since been sold to Fordonsgas a subsidiary of Air Liquide, France.

The UK's largest retailer, Tesco, is commissioning 25 Iveco EcoDaily light commercial vehicles  fuelled by sustainable liquid biomethane for its online retail and delivery service tesco.com. The fuel is made by UK company, Gasrec (the first commercial producer of Liquid Biomethane in Europe), and is created by extracting naturally occurring methane from organic waste in landfill sites and converting it to a high quality, clean fuel. [Source: Gasrec]. 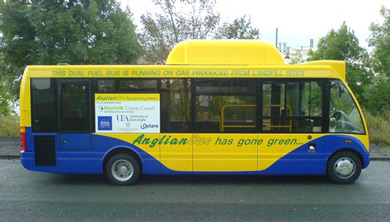 © Copyright UEA
In the UK, the University of East Anglia (UEA) Low Carbon Innovation Centre (LCIC) and Hardstaff Group (Nottingham, UK), have modified a standard Optare Solo single-deck diesel midibus from the Anglian Bus fleet. Originally powered entirely by diesel, the Mercedes-Benz engine has been adapted to run for 60-80 per cent of the time on biomethane.

In September 2014, Neste Oil announced plans to build a biopropane unit at its refinery in Rotterdam. In addition to the unit itself, the investment will include storage tanks and pipework. The project will start immediately and the plan is to begin sales of biopropane at the end of 2016. The total value of the investment is approximately EUR 60 million.

The new unit will purify and separate biopropane from the sidestream gases produced by the refinery. The process will increase the added value of this sidestream significantly, as the gas in question has been sold as fuel for power plant use up until now. When the new unit is complete, biopropane production is expected to total 30,000-40,000 t/a. Biopropane has a comparable set of properties to fossil propane and is suitable for use in existing liquefied petroleum gas (LPG) applications [Source: Neste Oil].

If methane is accidentally released into the atmosphere, it is much more damaging than carbon dioxide as a GHG. In 2008, the Naturemade certification system was initiated in Switzerland to guarantee the ecological quality of the biomethane injected into the grid. To qualify, the emission of biomethane (also known as 'methane slip') must not exceed 1% of the total biomethane generated by a plant [Source: BioGas Max].